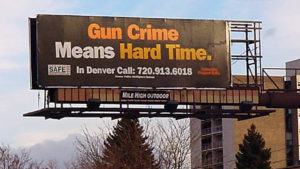 Project Gestapo is a private/public partnership designed to do one thing: prosecute ANY firearms violations at the highest level possible and with the most resources at the prosecutor’s disposal.

Some gun owners have bought into the Project Gestapo trap, banging the “don’t pass new laws, just enforce those we have now.” Much of Project Exile is an attitude about gun laws — that violating these laws cannot be tolerated in any form. But banging that gong is dangerous, since it empowers bureaucrats to launch a witch hunt for gun owners.

To many gun owners (undoubtedly including some of the readers of this diatribe) Project Gestapo is an appeasement to the gun control monster. This attitude — I don’t have that kind of weapon, so I don’t care if they make it illegal” is widely prevalent in America’s shooting culture, and may even be held by a majority of competitive shooters, who care so deeply about their sport that they are willing to throw a bone to the gun ban crowd in order to protect their specific, cherished method of shooting. Winston Churchill said “An appeaser is one who feeds a crocodile, hoping it will eat him last.” 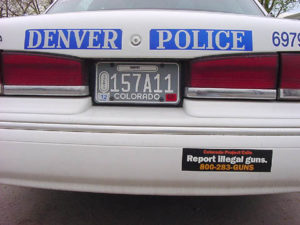 Why call it Project Gestapo? Simple: its program encourages citizens to stick their nose into their neighbors business and rat on them for “illegal firearms.” The secret police of the Nazi regime used these kinds of tactics not only to corner those in disfavor with the state but also to inflame a populace against a particular group in their society.

Where does Project Gestapo get its money? It has numerous sources, including leftist foundations and corporations, but it’s most prominent donors will surprise many.

The most alarming sources of Project Gestapo’s funding are the NRA and Sarah Brady’s gun-grabbing organization. In February of 2000 the NRA’s Wayne LaPierre joined James Brady and a bevy of lawmakers at a Denver news conference to unveil the launching of Project Gestapo in Colorado. They showed TV advertisements, billboards and other tools used to get citizens to turn in their neighbors for “illegal guns.” 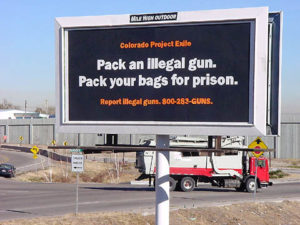 Why would the NRA fund this kind of project? The NRA is terribly sensitive to the media and the perception of politicians. They desperately want to avoid being branded as the radicals on the issue, and so they dabble in projects that bolster their image with these two groups.  LEAA, which is the NRA’s shill organization for law enforcement officers, is just one example, while Project Gestapo may be the most damaging example.

If you think you are insulated from this type of case because you don’t touch illegal guns, think again. Project Gestapo wants hides hung on the barn, and care little if they only prosecute paperwork violations. That retractable stock you may own, for instance, could be used on a rifle that isn’t allowed to have one, making you a target for prosecution. One prominent Denver attorney estimates that Denver’s federal bench is using 70% of its time to prosecute “gun crimes.” As a gun owner, expect to be vilified. 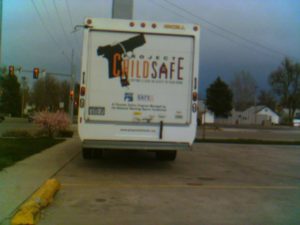 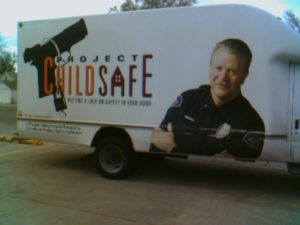 Traveling the country, and visiting cop shops in even small towns, is a Project Safe Neighborhoods van.  This vehicle is adorned with graphics of a handgun that is locked (making it useless when a burglar breaks into your home), and plastered with advertising for the National Shooting Sports Foundation , an organization which cloaks itself in pro-freedom language but in fact has supported gun control routinely.  This is yet another example. 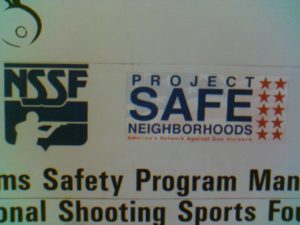 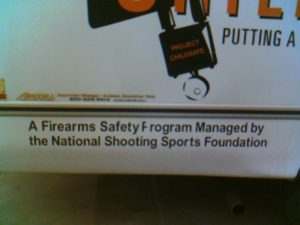