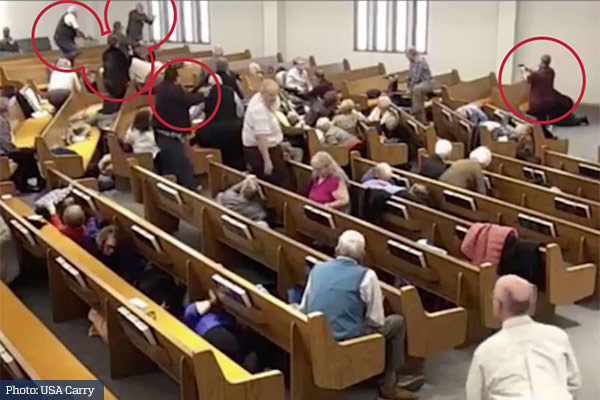 As hundreds attended the Sunday service at West Freeway Church of Christ in Fort Worth, TX, a violent man burst into the church, intent on murdering scores of peaceful parishioners.

As the attacker stormed in through a side door unleashing his violent assault, law-abiding citizens fought back and stopped the killer in his tracks.

Live-streamed on the church website, a man with a gun is seen bursting into the church, pointing his firearm at worshippers, and unloading rounds.

Jack Wilson, 71, is a security volunteer at West Freeway Church of Christ, and yesterday, his swift action saved countless lives.

With a shot to the head of the attacker, Wilson ended the rampage.

And at least four other church-goers drew their weapons and two of them fired their firearms to stop the attacker.

Their heroic actions are positive proof that ordinary citizens CAN and DO stop mass shootings.

While two innocent lives were taken by the attacker, the rampage would’ve been much worse if it weren’t for Wilson and his attentiveness.

No gun control laws or so-called “gun-free” zone signs would have prevented this criminal from murdering countless lives – only law-abiding citizens who shoot back.

It’s clear that criminals do not care about any such “License to Carry” laws – that’s why law-abiding citizens should not be forced to pay a tax or have a government permit to carry a gun.

Wilson truly saved over 200 people from becoming sitting ducks at the West Freeway Church of Christ on December 29th, as he and others in the congregation fired at the assailant.

That is why Rocky Mountain Gun Owners will continue to oppose gun control and fight to restore our Constitutional freedoms.

So please, chip in $20 or even $10 to help RMGO lead the crusade against gun control.