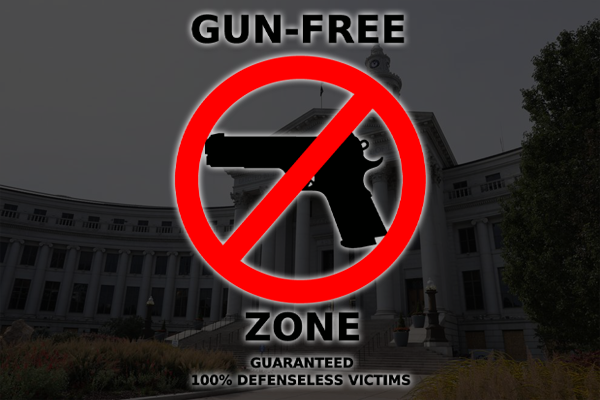 On May 16th, the Denver City Council voted to ban the concealed carry of handguns in all parks and all property owned by, leased by, or leased to the City or County of Denver. It will carry a $50 fine for the first offense, rising to $999 for every subsequent violation. This includes properties within the city limits and extends to parks owned or leased by the City of Denver, such as Winter Park Resort, Red Rocks Park & Amphitheater, Daniels Mountain Park, and Summit Lake Park. This is in addition to the many properties that aren’t associated with the city through official functions but contain restaurants and retail spaces. The full breadth of this bill will become apparent in the coming weeks and months.

The City of Denver has decided to address the rise in crime devastating the community in the worst way possible: prohibiting law-abiding citizens from exercising their right to self-defense. According to City Attorney Kristin Bronson, this legislation is “commonsense.” It would seem the City Attorney should look up the definition of “common sense” because nothing about this prohibition is sensical.

The inexcusable ineptitude of City officials at keeping their citizens safe has become abundantly clear. In her press conference, Kristin Bronson said, “We believe residents and visitors of Denver have an expectation that when visiting a Denver Park with friends, family, and children anywhere in our system, that each park is a gun-free zone.” Safety is clearly not the number one concern for the bureaucrats, and facts seem to come after ideology. There is no rational reason to explain why they would deprive law-abiding citizens of the protection the City refuses to provide. If she was genuinely equipped with “common sense,” how did the conclusion end up in disarming law-abiding citizens?

The progressive left has been vocal in its calls for defunding and disempowering law enforcement. Police are more disempowered than they’ve been in years, and the force is dwindling. The City has had no answers for the rise in crime that are effective, leading to Denver losing its status as one of the only safe metropolitans in America. In a time when even Los Angeles is making concealed carry more accessible, the City of Denver believes “gun-free zones” are the answer to the increased threat of violence.

Dudley Brown, President of Rocky Mountain Gun Owners, joined KOA 850AM/94.1FM to comment on the new laws. He pointed out that Kristin Bronson’s desire for “gun-free parks” is more akin to a “letter to Santa Claus.” According to Dudley, the only people that will be gun-free in the parks are law-abiding citizens. I’m sure Bronson would disagree, as she believes criminals are known for their respect for the law, which they are not. This ordinance marks a significant step back from the work RMGO did in the early 2000s to eliminate “patchwork” gun control laws throughout the state. He pointed out that in Colorado, CCW holders have committed crimes at almost half the rate of the police, let alone the general population. In a time when the police have been hamstrung in their duties by political malfeasance, the people should be empowered to protect themselves. As he puts it, this is a “perfectly woke” piece of legislation, borne of a desire to blame the tool for the crime, rather than holding criminals accountable.

Taylor Rhodes, Executive Director of RMGO, tried desperately to sway the city council, engaging in campaigns to contact the lawmakers and organize against the proposed legislation. He attended every City Council meeting, in person or virtually, in an effort to sway the politicians, but to no avail. Additionally, RMGO Members sent nearly 1,200 emails to the city council urging them to reverse course and vote no. Our members made it abundantly clear that this ordinance is not about protecting the people; it’s about forwarding their own woke political agenda to disarm the population as much as possible.

The facts regarding Concealed Handgun Permit holders make it clear just how asinine this bill really is. CCW holders commit violent crimes at a rate of 128 per 100,000, as opposed to the general population at 710 per 100,000. Simply put, this means CCW holders are more than five times less likely to commit violent crimes than non-holders. According to the Florida Department of Justice, CCW holders have had a crime rate of .02% since right-to-carry was enacted in 1988. Considering that 77% of all violent crime is committed in public places (U.S. Department of Justice), prohibiting the concealed carry of firearms explicitly in public is anything but “common sense.” The list goes on, and the conclusion becomes clear: Concealed Handgun Permit holders are not the issue. In fact, they are the most law-abiding citizens in the country, committing firearms violations at 1/7th the rate of police.

Denver’s crime rate is skyrocketing. According to the Denver Post, the violent crime rate was the highest it has been since 1994, at 928 per 100,000. Colorado has become the number one state for vehicle theft in the country, and aggravated assault has climbed by over 20% since 2019. Denver was once the premier example of a safe, clean, metropolitan district. Now, it is following the same trends as all the other overwhelmingly blue cities in America – violent crime, homelessness, and a city in decay.

Time for a bit of logic: If crime rates are rising, and the police are understaffed, citizens are being victimized, and CCW holders are less likely to commit crime than any other population in America, then…? Well, the logical “common sense” conclusion would be to further empower law-abiding citizens to carry the tools for self-defense with them whenever possible. Instead, the City Council decided that their constituents could not be trusted to defend themselves. Unfortunately for the people of Denver, intelligence seems to be as hard to come by in their city council as baby formula is in grocery stores. Given the fact that ideology (not critical thought) dictates their decisions, this is hardly surprising.

The vote was 9-3, with Candi CdeBaca being the driving force behind the “no” votes. In a tweet Monday morning, she stated, “I am physically sick to my stomach. Council just approved a ban on CCW in parks that’ll justify racial profiling & responding guns drawn to allegations of a gun. No proof needed. No data backing this ban except that last year Black people had the highest rate of CCWs approved. Shame.”

She is absolutely correct. Denver Police can easily use the fact that someone is a CCW holder to generate probable cause for detainment. In a climate of increased violence from the criminal class, the City of Denver has taken aim at those who simply want to defend themselves from the consequences of an inept, morally bankrupt city legislature.

In the meantime, we are still waiting on decisions by the Supreme Court on the authority of local governments to restrict gun access; it seems that progressives will try to take as much ground as they can. While New York State Rifle & Pistol Association v Bruen is waiting to be ruled on, there is a significant threat that more cities in Colorado will attempt to restrict concealed carry. Denver may have always been a lost cause, but that doesn’t mean we cannot prevent further encroachments throughout the state. Hopefully, the Supreme Court does perform its duty to the people in its opinion on NYSRPA v Bruen, and establishes constitutional carry throughout the land. Until then, Rocky Mountain Gun Owners will continue to fight tooth and nail for your God-given right to bear arms.